The description of this blog says "Creative Resistance." I love how this sounds. I love creativity and like countless others, resistance has become the battle cry of all us who don't want to accept the world in which we currently reside.

If we are to resist, if we are to say no to the rampant bigotry, the televise lynchings, the assumption that an opinion is better than facts, we must fill the void with something that builds and grows and creates connections between people.

My niece is doing this in the UK. She is looking for the spaces to fill with art and thought. I couldn't be more proud.

What the Psychopath Test Has to Teach us About Capitalism

For quite sometime now I have argued that wealth is an obscenity and that rich people are not to be admired but to be feared.
My feeling is that if you are wealthy, and I'm talking about Zuckerberg wealthy, Trump wealthy, then others are poor because these obscenely wealthy people have more than they need and have therefore deprived others.
Additionally, these people got where they are through nefarious means or have inherited wealth that was got through ruthlessness.
I still believe that and I have yet to be proven wrong....

A Time for Play 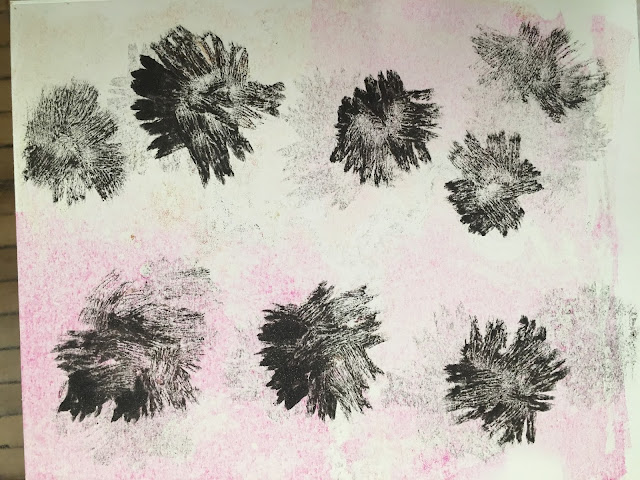 I have been itching to try printmaking for years now. Our local community college doesn't do these classes, but I found a new place called Roots+Wings that is a preschool as well as offering adult classes. 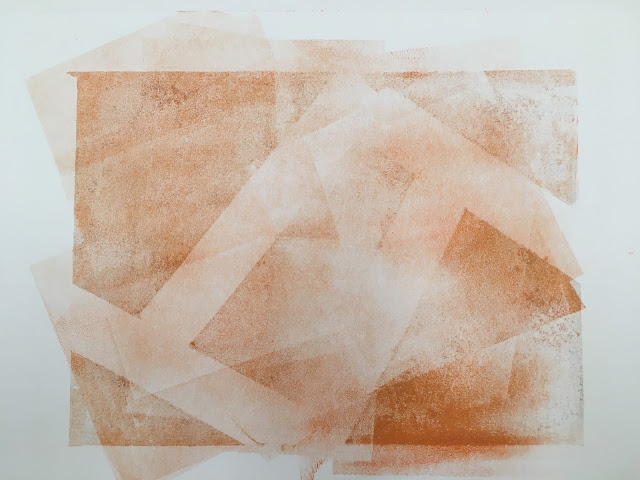 I have become a firm believer in the importance of spaces that are pleasant to be and work in. This school immediately had me in love. It smelled of art supplies, was full of art stuff but was tidy, modern and spacious. It was a treat just to look around at the projects the children had been doing, I almost wanted to go home and wake my daughter up to make something. 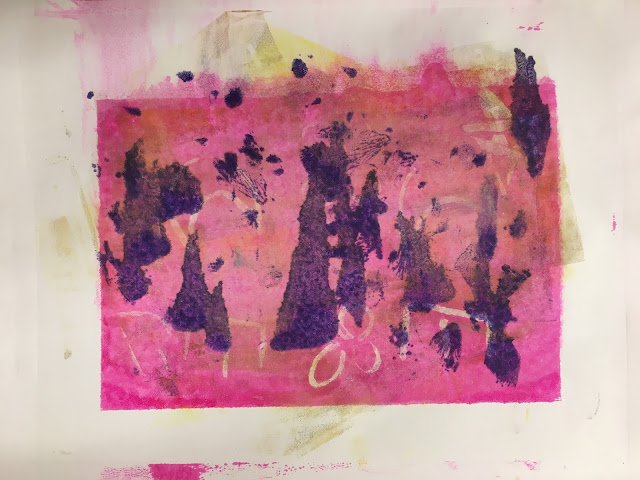 The atmosphere inspired a sense of play in me and the other students. You can keep your spas, this is how I find time for me. Imagine how different the world would be if we made more time for this kind of play instead of sitting while someone painted our toe nails... 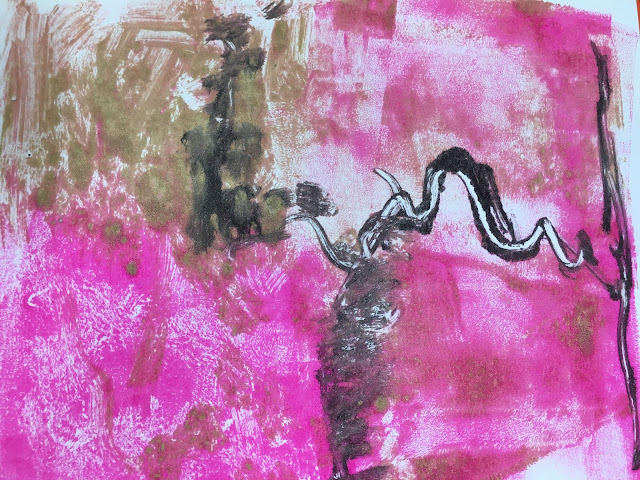 Throwing Spaghetti at the Wall 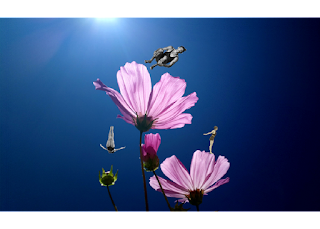 Illustration, instructional design, blogging, video art, digital design, motion graphics, articles, books, activism. You name it, I have a hand in it. It may seem a lot but they are all interconnected, fun to do AND its all building for the future. It's like throwing spaghetti at the wall and seeing what sticks.

I have always been one to jump from one thing to the next and I have decided to embrace it rather than see it as a flaw. I have one book to thank for this, and here is my shameless plug: Art Thinking: How to Carve Out Creative Space in a World of Schedules, Budgets, and Bosses by Amy Whitaker. In this book she talks about how to have a more creative life that is successful and fulfilling. It's worth read whether you are an artist trying to make it happen or someone who works in an office that wants to be more creative. This book has been hugely liberating for me. It has given me permission to pursue all my passions and with that has a sense of control and focus.

With this has also been a low tolerance for the things that I realize are wasting my time, as well as increased discipline. Time on task has been a problem for me in the past; I tend to jump around all too easily. I am now beginning to see my triggers for this and coming up with ways to nip it in the bud.  Part of that I think I can thank meditation for. True, I don't practice as much as I should, but I have done some workshops recently on meditation and the technique of focusing the mind has helped me in other parts of my other life too.

This is the closest I have ever been to the productive, creative life I have always craved.  Here's a little run down of all the things.
Illustrated Food - Socially conscious food blog with recipes and my illustrations.
Crave - Illustrated food memoir with recipes.
The Coven - Social activism blog
Crude Reform Store - Society 6 store of my collage and altered images.
Freelance work - Articles on art, illustrations and instructional design.
Innovation Curriculum - For my day job, a whole curriculum on how to be more innovative in our work.
Posted by LizW at 09:28

Have You Been a Good Girl?

When you wake up, you start unravel the world that was made around you and into which you were forced to fit.

The injustices that you're privy to, it seems are always couched in language to imply that it was the victim's fault because they did not abide by the rules.

This reality was the impetus for the work. The poem is a kind of inventory of all the ways women are told they are to blame for their own abuse.

Creating this work was cathartic, the women reading the poem are my dear friends and it was so moving to hear how they took the words and fed them.

The footage of the girl made up to be a clown was so poignant, we are taken for fools everyday.

At this point everything matters. We have to keep speaking up and fighting for change. I am so PISSED OFF! When I see old white men choosing power over service and oppressing at every turn then I just want beg my husband to move back to Europe. But that's cowardly and you can escape the fight. It's everywhere.
However we also need to do the things that feed our soul. So if it means drawing pictures, writing poems and then driving representatives crazy by clogging their fax machines with them then so be it. Join us! The Faxtivist is a new group of creatives using THEIR voice as THEY choose to resist and speak up.
https://www.facebook.com/groups/408005566210416/ 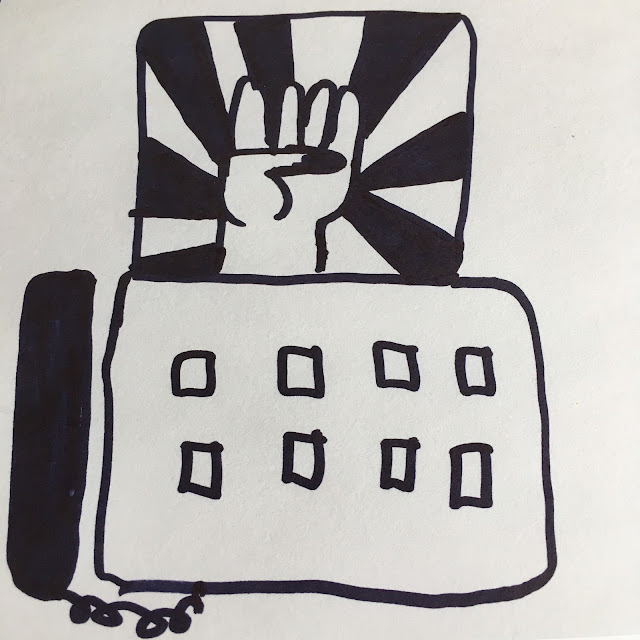 Great and specific tips from an elected official. Please copy and share widely.
From a high-level staffer for a Senator-
There are two things that all Democrats should be doing all the time right now, and they're by far the most important things.
--> You should NOT be bothering with online petitions or emailing.
1. The best thing you can do to be heard and get your congressperson to pay attention is to have face-to-face time - if they have townhalls, go to them. Go to their local offices. If you're in DC, try to find a way to go to an event of theirs. Go to the "mobile offices" that their staff hold periodically (all these times are located on each congressperson's website). When you go, ask questions. A lot of them. And push for answers. The louder and more vocal and present you can be at those the better.
2. But, those in-person events don't happen every day. So, the absolute most important thing that people should be doing every day is calling.
You should make 6 calls a day: 2 each (DC office and your local office) to your 2 Senators & your 1 Representative.
The staffer was very clear that any sort of online contact basically gets immediately ignored, and letters pretty much get thrown in the trash (unless you have a particularly strong emotional story - but even then it's not worth the time it took you to craft that letter).
Calls are what all the congresspeople pay attention to. Every single day, the Senior Staff and the Senator get a report of the 3 most-called-about topics for that day at each of their offices (in DC and local offices), and exactly how many people said what about each of those topics.
They're also sorted by zip code and area code. She said that Republican callers generally outnumber Democrat callers 4-1, and when it's a particular issue that single-issue-voters pay attention to (like gun control, or planned parenthood funding, etc...), it's often closer to 11-1, and that's recently pushed Republican congressmen on the fence to vote with the Republicans. In the last 8 years, Republicans have called, and Democrats haven't.
So, when you call:
A) When calling the DC office, ask for the Staff member in charge of whatever you're calling about ("Hi, I'd like to speak with the staffer in charge of Healthcare, please") - local offices won't always have specific ones, but they might. If you get transferred to that person, awesome. If you don't, that's ok - ask for their name, and then just keep talking to whoever answered the phone. Don't leave a message (unless the office doesn't pick up at all - then you can...but it's better to talk to the staffer who first answered than leave a message for the specific staffer in charge of your topic).
B) Give them your zip code. They won't always ask for it, but make sure you give it to them, so they can mark it down. Extra points if you live in a zip code that traditionally votes for them, since they'll want to make sure they get/keep your vote.
C) If you can make it personal, make it personal. "I voted for you in the last election and I'm worried/happy/whatever" or "I'm a teacher, and I am appalled by Betsy DeVos," or "as a single mother" or "as a white, middle class woman," or whatever.
D) Pick 1-2 specific things per day to focus on. Don't go down a whole list - they're figuring out what 1-2 topics to mark you down for on their lists. So, focus on 1-2 per day. Ideally something that will be voted on/taken up in the next few days, but it doesn't really matter - even if there's not a vote coming up in the next week, call anyway. It's important that they just keep getting calls.
E) Be clear on what you want - "I'm disappointed that the Senator..." or "I want to thank the Senator for their vote on..." or "I want the Senator to know that voting in _____ way is the wrong decision for our state because..." Don't leave any ambiguity.
F) They may get to know your voice/get sick of you - it doesn't matter. The people answering the phones generally turn over every 6 weeks anyway, so even if they're really sick of you, they'll be gone in 6 weeks.
From experience since the election: If you hate being on the phone & feel awkward (which is a lot of people) don't worry about it - there are a bunch of scripts (Indivisible has some, there are lots of others floating around these day). After a few days of calling, it starts to feel a lot more natural. Put the 6 numbers in your phone (all under P – Politician. An example is McCaskill MO, Politician McCaskill DC, Politician Blunt MO, etc...) which makes it really easy to click down the list each day.
An addition: Some live in DC, with no voting representation - what do I do?? I've been calling senators on committees who are dealing with nominations. I figure their job is to represent all of us, and where staffers ask for my zip code, I give it to them and politely say D.C. has no senators. (For some I'd like to say, "and also your boss thinks it's his/her business to f*** with the District's democratically passed laws.") It's not perfect, but it's better than not calling, and some don't ask for zip code/location at all.
Posted by LizW at 14:43